Get your hand odds!

Luca Pagano, Talented Poker Player from Italy and a Fan of "Depeche Mode" 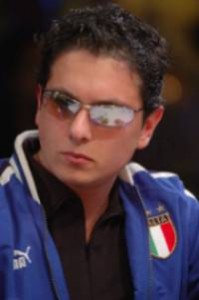 Luca Pagano was born in July 28, 1978 in Preganziol, Italy. If you are looking for an aggressive player, Luca is not the one, although he is Italian. He is so disciplined that lots of poker players can envy him and desire to look like him.

On September 2008 he was called Pokerstars Player of the Year. It happened just one day before European Poker Tour 5 started in Barcelona.

Before, he managed the night clubs, discos and even a travel agency. He is just like any other guy of his age, who likes Playstation (which is not weird nowadays) and Wii and also he is a frequent user of the social networks like Facebook and Myspace.

His father taught him to play Backgammon, which became a corner stone of the professional career.

His total winnings as of today are a bit over than $1,150,000. He started playing professional poker only 3 years ago and look what result he achieved.

Luca Pagano managed to cash in more EPT than the vast majority of the professional players so far.

Poker for Dummies
by Richard D. Harroch Play Poker Like the Pros
by Phil Hellmuth